A downloadable game for Windows

The latest build contains a level playtest. Please give feedback in the disc!

other songs composed by me

The developer is a really nice guy,  he interacts with his community a lot. Other developers could take note about how to be as cool of a dude as he is.

Can't wait for the rule 34 artists to find this

this game is pretty :ok_handsign:

Love the project, Myeowbro. I'm happy my chill spot hasn't been patched out. And now I can sit on the edge and admire the mayhem.

I don't think making the enemies damage sponges was that good of an idea. I liked mowing  them down in the previous demo. Felt... tactical, I guess? This is especially an issue with the shotty, which is a peashooter now. Maybe at least make headshots do more dmg, like in the previous build?

You should consider making the projectiles actually shoot from the gun muzzle instead of the camera. having the AI smuggo appear behind your character and still shooting her instead of your intended target is surprising.

Hope you'll find time to re-align the weapons with the character models. That pistol is teeny in the waifu's hands. The slide also keeps moving on the pistol. The rig you're using bugs out sometimes and stops aiming up/down which makes it look strange, see: 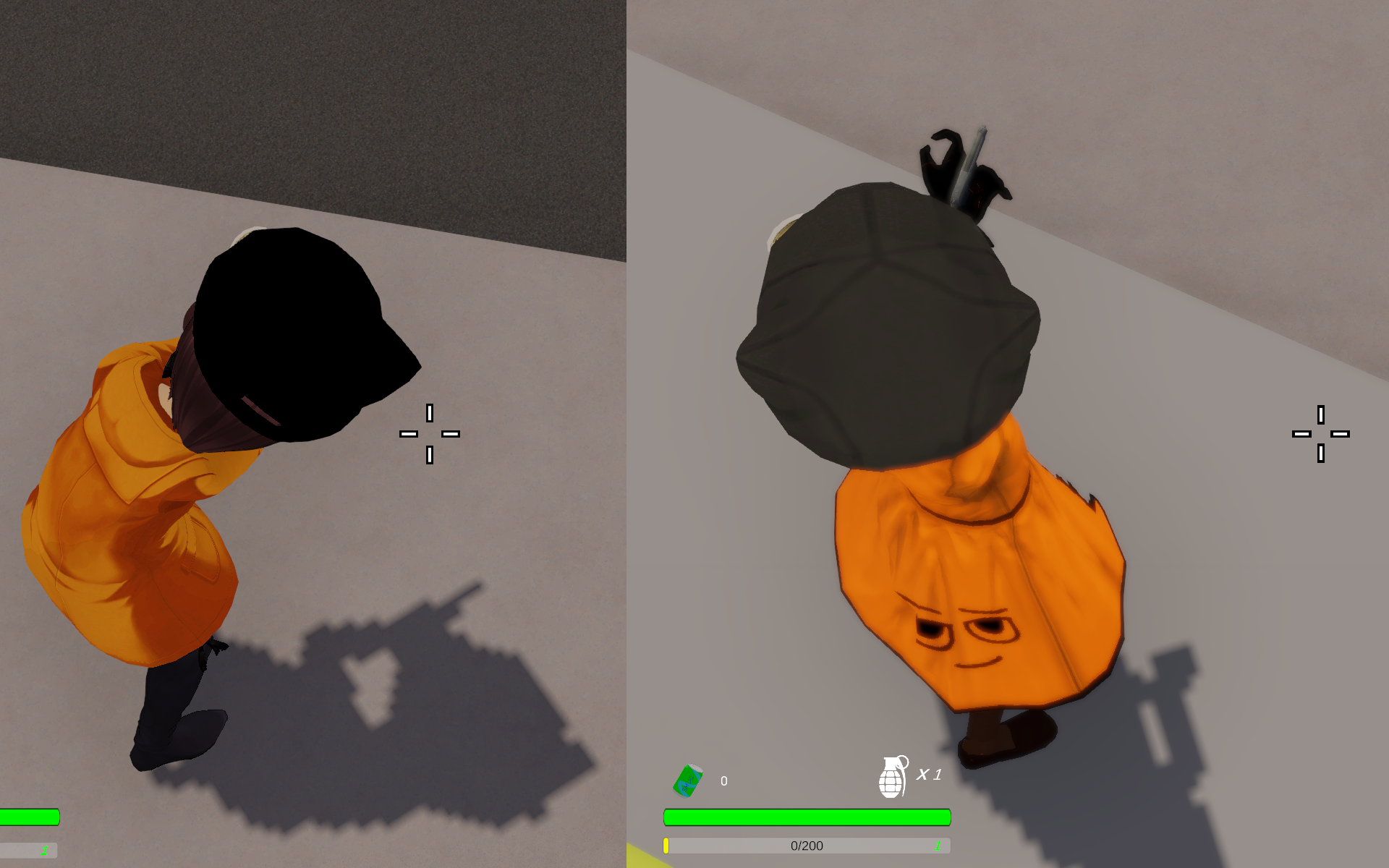 I do like the new model overall, though the previous one was better imo. Gave off a cool smug operator grill vibe. Those boots were sexier too.

The melee animation is very silly and the takedowns leave you way too vulnerable. You can bug out the movement if you keep mashing q and t at the same time, trying to go from slide/crash to takedown.

I love the slide but keeping both the roll and slide would be much better (hold down crouch to perform the other for example). You might want to consider basing the slide speed/distance on the movement of the character when hitting the button. Now I can keep mashing Q and having the waifu boost around the level with it like Raiden. It also is a one-hit-kill 50% of the time.

Crouch movement is annoyingly slow now compared to the old version. I'm used to having crouch under C so the previous default scheme was perfect for me.

Auto ammo and smugola cola pickups are a godsend.

Wow thanks for the feedback! I really appreciate it!

So for this version, I felt like there needed to be more variety for the enemies, so I made all the enemies tougher, but much weaker to all damage when they are ragdolled. The idea was to encourage more creative gameplay instead of just spawncamping.

After a couple of playtests, it could be that prompt at the beginning wasn't obvious enough that the enemies take more damage when knocked down or sliding wasn't reliable enough and that it's overall just easier to headshot them all. Regardless, I'll flesh out the slide so that it clearly is a core feature to the game.

I got an asset for handling IK, so hopefully, weapon placement should just work

Another un-documented thing was takedowns restore a sliver of health each hit, ultimately I intended it to be sort of like Doom's style kill, but It needs tweaking to be useful for certain situations.

I agree, when aiming, anything behind the player kinda screws everything up, I'll try to make it more "smart" and probably make things translucent when its in your way.

The roll is still in the game, it only happens when you press the slide button when getting up from a ragdoll. It's almost functionally identical minus the sitting down. I was planning to make it

Crouching has a pretty niche use and I agree, it's not very polished at the moment. It lowers your hitbox and can force enemies to go around the corner to attack you if the cover is high enough.

The model was made entirely in VRoid Studio so I was pretty limited by the clothing. The second pass will include sexier boots.

I'm so used to toggle sprint so that was the default when I implemented it. I'll implement a toggle for a hold too.

I managed to get rid of that Saki girl, incapacitated her and she must have respawned outside of the map. And guess what, it kinda turned into a stealth game. Managed to sneak up on two of the enemies, too bad there isn't a takedown option 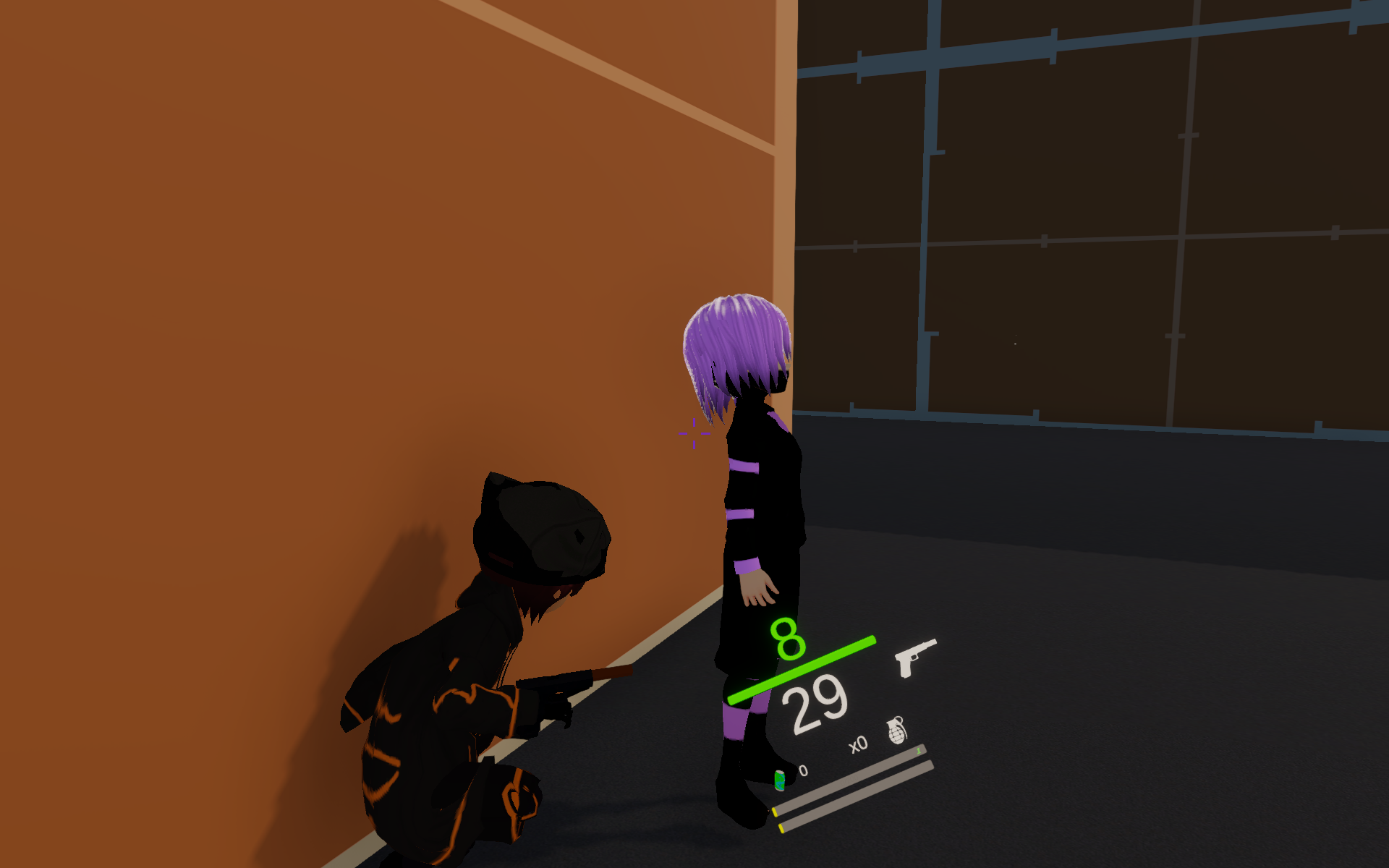 Haha I should definitely add that option when you crouch. I designed it to be like a glory kill

really like this game I enjoyed it... even though I was bad at it :/

Was the game laggy or is that just your recording software?

No it was my mouse sensitivity it was too high...

Reply
DizzY1 year ago
Loved the game! i am wondering are you going to be adding stuff to the game? it would be awesome to seee this game dev into!
Reply
Meowzors1 year ago

Haha you downloaded the old version. I just added a couple things in 1.1. I'm going to update it semi frequently when I have time.

Sweet! how do i get access to the updated version!

I love this game, I just wish it had mouse sensitivity control. My touchpad just flings around when I try to aim

Alright, I'm gonna add that whenever I can!

The mouse sensitivity update works for me! Thanks

We enjoyed this, are you going to release a full version...?   If so we would like to play the full version, some of the mechanics and physics were fun to play around with :)  All in all, it was fun!!

I really hope to! I work on it in my free time whenever I can and I want to release it on steam. Thanks for making a video on it!

No Problem!!  Keep up the good work!!   We will keep our eyes out for the full release :) 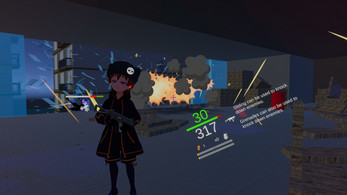 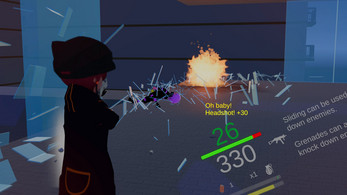